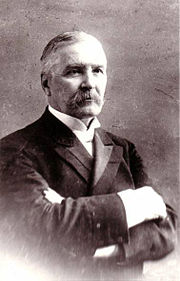 Taras Bulba is a four-act opera by Ukrainian composer Mykola Lysenko. The libretto was written by Mykhailo Starytsky (the composer's cousin), and was based on the novel Taras Bulba by Nikolai Gogol. The story was about a Cossack who kills his son after he betrayed those fighting for their freedom.

Lysenko worked on Taras Bulba during 1880-1891, but it was his insistence on the use of the original Ukrainian text for performance that prevented any productions during his lifetime. He was so intent on elevating Ukrainian culture to European standards that he refused to allow the opera to be translated. The opera, which Lysenko also maintained was too ambitious for Ukrainian opera houses, was eventually staged during the Soviet period in Moscow after it was reorchestrated by Levko Revutsky.

Shortly after completing the opera, Lysenko played the score for Peter I. Tchaikovsky, who reportedly listened to the whole opera with rapt attention, and particularly liked the passages in which national, Ukrainian touches were most vivid. Tchaikovsky embraced Lysenko and congratulated him on his talented composition.

The opera, which was unrevised at the time of the composer's death in 1912, was first performed in 1924. However, present-day performances are based on thorough revisions which modified the text, the music, and the orchestrations. These revisions were completed in the 1930s and 1950s.

The opera remains in the repertory of the Kiev Opera House, which has also performed the opera abroad in Wiesbaden (1982), Dresden (1987) and Zagreb (1988). The opera house traditionally performs the opera at the end of each operatic season in Kiev.