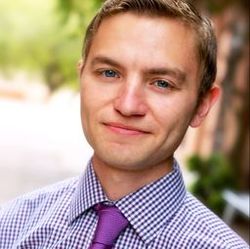 Talking Points is my second piece centered on the topic of political discourse. It was written just after the disastrous first presidential debate on September 29, 2020, and much of the material for the accompanying fixed media tracks is sourced from that event.

I frequently find myself thinking about the correlations between verbal discourse and musical counterpoint, with ideas about conversation and turn-taking translating naturally into motivic development and musical form. In this piece, those ideas break down as I juxtapose a percussive, additive rhythmic pattern (which is heard in the first three measures) with a meandering theme first played by the low brass. These two themes become the basis for the rest of the piece, with the first repeatedly interrupting the second with only slight variations each time.

In our modern political discourse, we are constantly being fed carefully crafted talking points through social media, radio, and television. We hear them over and over again with only slight variations each time. For me, this awareness comes with a desire to cut through the noise and think for myself, rather than let the talking points do the thinking for me.

Courtney Snyder at the University of Michigan had asked Evan Chambers if any composition students would write pieces to accommodate the reduced performing forces resulting from COVID-19. I had the opportunity to choose from different instrumental subsets outlined by Dr. Snyder and ended up going with a dectet, which I opted to augment with harp and percussion. The idea to include fixed media came after I had written the first half of the piece.