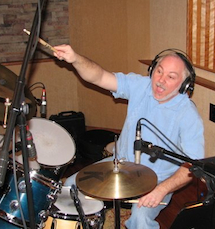 T Minus Five is based on a bluesy 5/4 groove with a bit of a march feel. After an opening melodic statement it winds into a bit of a frantic, upbeat groove, then settles back into its original vibe. Drum set and timpani are featured swapping measures, and the piece morphs into a smooth jazz groove. For a bombastic percussive effect, the piece incorporates metallic sounds for impact. Returning to the original groove the piece winds down, but comes right back at the listener with the entire ensemble stating the rhythmic motive.