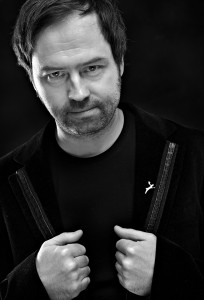 Tõnu Kõrvits (b. 9 April 1969) is an Estonian composer, educator and arranger.

Tõnu Kõrvits graduated from the Estonian Academy of Music and Theatre’s composition department with Raimo Kangro in 1994 and continued in master’s studies with Jaan Rääts. During the studies he also participated in master courses for young arrangers with the Metropole Orchestra and conductor Vince Mendoza (Hilversum, Holland, 1997) and in the master class of composer Stephen Montague (Gdansk, Poland, 1998).

Kõrvits’ sound world stands out as highly poetic, full of visionary fantasies. In last decade, Estonian folk song and sometimes also other archaic and exotic song traditions have become important as a substance and source of inspiration for the composer.

Kõrvits’ plentiful oeuvre includes all traditional genres from orchestral music, instrumental ensembles and works for solo instruments to choral music, solo songs and operas. He started composing in 1990s with works in neo-romantic style. In the first half of the 2000s, orchestral works with elaborated and fluid sound canvas were composed, such as The Sign of Love (2002) and Eldorado (2002). In 2000s, Kõrvits has also composed a series of works reflecting the imagery of the mythical northern land Thule, an archaic prototype of Estonia – such as The Songs from Thule (2002). Most of these works are characterized by significant role of Estonian folk song and mythological subtexts. His excellent melodic gift is evident in his numerous and popular works for solo instruments. In recent years the composer has been focused on vocal and choral music being still inspired by Estonian and Northern traditional culture.

In addition to writing contemporary compositions in the classical idiom, Tõnu Kõrvits is known as an accomplished arranger and orchestrator of popular music. He was a nominee for the Estonian Music Award ’98 in the Best Arranger category. He also has composed soundtracks for documentaries, puppet and animation films.

As a talented and prolific creator, Tõnu Kõrvits has gained recognition from the Estonian state and cultural institutions a number of times. He was awarded the Heino Eller Music Prize in 2001, the Young Artist Prize by the Board of the President’s Cultural Foundation in 2002 and the Annual Prize of the Endowment for Music of the Cultural Endowment of Estonia in 2004 and 2014. Since 2015, Tõnu Kõrvits is an honorary citizen of Clarksdale, Mississipp,i for his music through which he has brought honor to Clarksdale, The Delta and to the preservation of the Blues. In 2016, Kõrvits was given the Order of the White Star 3rd Class. In 2018, Tõnu Kõrvits was given the Lepo Sumera Award for Composition.

Since 2001, Kõrvits has been a lecturer of composition and instrumentation at the Estonian Academy of Music and Theatre.