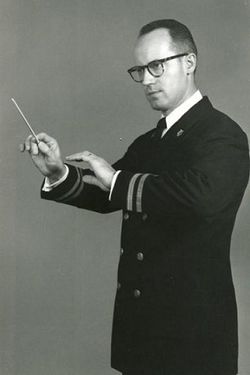 Dr. Donald McGinnis (1917-2016) served on the faculty of The Ohio State University as conductor and professor of woodwinds from 1941 until his retirement in 1979.

The Symphony for Band was McGinnis' doctoral dissertation at the University of Iowa in 1953, and was composed under the supervision of Phillip Greely Clapp (1888-1954). McGinnis was, in part, responding to the trend at the time for composing and commissioning large-scale works for the concert band. The language of the piece is a synthesis of twentieth-century techniques, including a partial use of 12-tone serialism in the outer movements. The piece is at turns colorful, highly technical and lyrical, and at an early performance, Percy Aldridge Grainger commented on the high quality of the work. McGinnis originally composed his Symphony for Band in five movements, but dropped the fourth movement, Solemn Tune, in a revision of the piece in the mid-1960s, and when the piece was published in 1977, this movement was left out. Research by Matthew Saunders brought this missing movement to light, and Dr. Saunders made score and parts for this movement available to any interested performing groups.