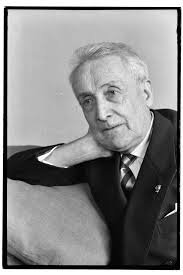 Among the fifteen symphonies composed by Arthur Meulemans, the fourth symphony is the only one he didn’t intend for full symphonic strength. His first three symphonies were written for the Symphonic Orchestra of the National Radio Institute (NIR), the radio orchestra he conducted since 1931. This fourth symphony might have been intended for the Big Symphonic Wind Band of the Belgian Guides, the excellent military band led by Arthur Prévost since 1918. It is our educated guess that Meulemans, who maintained good relations with Prévost, had in mind the Symphonic Wind Band of the Guides while composing his fourth symphony for wind instruments and full percussion, although this band didn’t create the work.

To be sure, Meulemans started his fourth symphony in 1934 and finished the orchestration on 17 March 1935. The work then remained for some years in the cartons until the Big Symphony Orchestra of the NIR premiered it under the baton of its chief conductor Franz André on 15 December 1939. After the premiere the musicologist Marcel Boereboom wrote in De Standaard:

"In the symphony for wind instruments and percussion Meulemans ventured to tackle a difficult technical problem, viz., to preserve in their individuality the sound of woodwinds, brass and percussion, fusing these timbres into a balanced and yet light sonority at once sustaining symphonic reverberations. Adding to this he wonderfully succeeded in avoiding any frictions or gaps, realizing everywhere a transparent clarity of line patterns, both sinuously fragmentary and lyrically vast. Concurrently the composer manages to create a fluent and varied life in the four short and well-structured parts. The first part captivates us as a colourful mosaic; the allegretto scherzando we call a gem; in the third movement the brass instruments sing intimately yet broadly; and the fourth, in our opinion the most characteristic one, is a simple but finely sparkling rondo, bright and virtuoso in the use of instruments. Grand-sounding fanfares open and conclude."

Only many years after the creation did the Symphonic Wind Band of the Guides at last include the symphony in its repertoire. As such this band under the baton of Yvon Ducène performed the work a few days before Meulemans’ death.

A sonorous opening of the brass - a sensitive unisono phrase of the horns. Presently the musical idea of this composition is clearly indicated: a dynamic and melodious element. Immediately taken over by the woods, it develops into a rich and varied play, full of coloration and rhythm, each instrument playing a solo part and weaving the many threads of the orchestral loom into a wonderful pattern.

The second part conjures gay movements out of the same theme. Quite timidly the dance opens, the castanets babble, the bells of the tambourine jingle into an amusing habanera; soon the whole orchestra joins the dance in a waltz tempo sweeping the old trombone into a bella sonorita. Then from the growing Adagio and from the melodious motif a sweet and intimate song develops broadly sung out by trumpets and the trombones accompanied by the deep warmth of the bass tuba. Just one moment the horns are given their turn in tender and delicate chromatics. At first the woods have been religiously attentive, but they can sing like everything that has breath, and together with the brass they carry the theme in a grandiose song and counter-song to an intense height.

The fourth part is dominated by imposing fanfares with percussion ending the composition. Meanwhile, however, right in the middle of this finale one hears, like a precious jewel, a brilliant Rondo, the theme of which is clearly recognizable, betraying the workmanship of a virtuoso of orchestration.