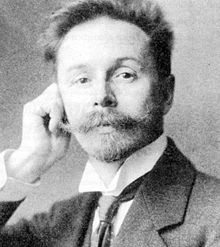 The Movement V, Maestoso, is a standalone transcription.

Alexander Scriabin's Symphony No. 2, Op. 29, in C minor was written in 1901 and first performed in St Petersburg under Anatol Lyadov on 12 January 1902. It is the most structurally conventional of all Scriabin's symphonies. However, it features extensive thematic transformation establishing a cyclic link between its movements. The sombre initial theme of the first movement is developed to a triumphant hymn functioning as the main subject of the finale.

When Vassily Safonoff, conductor of the New York Philharmonic from 1903 to 1919, conducted Scriabin's Second Symphony for the first time, he waved the score at the orchestra and said, "Here is the new Bible, gentlemen..."

In the final part Maestoso of the Second Symphony in c minor (1901), Scriabin wanted to bring to sound the radiant triumph of men over life's obstacles and defeats. His striving was a concept so simple that all people of the entire world might understand: 4/4 time and diatonic triads in C-major.