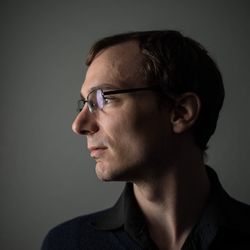 This interesting work, winner of the 2014 Canadian Band Association Composition Competition, is intended to bring to mind three images: the flowing of water down the Saskatchewan River, the passage of time for the people connected to the river, and a rite of passage as the modern community enters its second century.

A broad majestic opening with brief solos by clarinet and alto saxophone introduces a slow cantabile section with occasional changing meters. A slightly faster, thinly scored passage with solos for flute and alto saxophone leads to a fast, driving section introduced by solo snare drum. The intensity builds as instruments are added while the piece moves through fast shifting meters and contrasting textures before arriving at a soft, reflective closing section introduced by solo clarinet, bringing the work to a sensitive conclusion.

Swiftriver Passage was commissioned by the North Battleford High School Concert Band and the Living Sky School Division for the Centennial Celebrations of the City of North Battleford, Saskatchewan, in 2013.