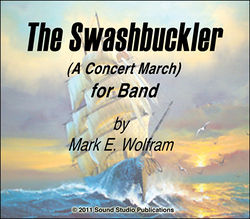 The Swashbuckler (A Concert March) for Band

Whether on the high seas, at a distant archaeological dig site, in the forests of medieval England or even on a pirate star cruiser, the swashbuckler character - a loveable rogue - has long been a part of literature. The early Hollywood films of the 20th century established a visual archetype for this iconic character, complete with his own brand of music - flamboyant, exciting, swaggering, and yet always with a hint a whimsy. To this day these silver screen characters are often revisited and remain extremely popular.

The Swashbuckler (A Concert March) for Band embodies all these qualities - giving every section of the band an opportunity to metaphorically swing from a yardarm, duel with a sword, find a lost treasure and (of course) save a fair damsel. From its robust theme in the brass section to its sweeping woodwind passages, "The Swashbuckler" offers a refreshing alternative to the traditional march fare. Fanfare-inspired passages are contrasted with faux-fugal sections, complex and angular harmonic interludes, all punctucated with exciting percussion and unexpected timbral and tonal episodes.