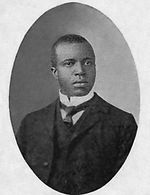 The music in Sunflower Slow Drag is full of gaiety and sunshine, having the chipper emotional character found in many of Joplin’s happiest compositions. After a brief introductory passage, the jaunty main theme appears in all its ragtime cheer, typical of Joplin’s works. The closing is especially reminiscent of the close of his more famous The Entertainer, with big, celebratory chords leading to the second section of both works. While not as well known, this cheerful four-minute work deserves all the fame and popularity as the better-known The Entertainer.