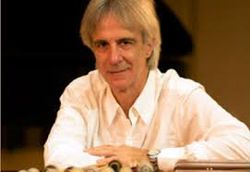 This work was written to celebrate the 500th anniversary of Brazil, commemorated in the year 2000. The work is originally scored for solo percussion and symphony orchestra and has twelve movements.

If a letter of the alphabet is assigned to each musical note, assigning the note C to the letter A, the note C# to the letter B and so on, the word Brasil (Brazil in Portuguese) produces the pitch set: C#, F, C, F#, G#, B, which forms the chord of C# suspended with an added minor seventh. This chord and arpeggio serves as thematic material for the introduction, and constantly reappears throughout the entire composition.

1) Europe: Motherland: After an introduction, the first theme is presented by the flute and harp alone, suggesting a tradition from ancient Greece and the Iberic Peninsula, from where the Portuguese departed to discover Brazil in the year 1500.

3) The Land represents the sonorous environment of the untouched rain forests of Brazil, its beautiful beaches, its birds and the melodies that arise from the vastness of this new land.

4) The Indians: The frenetic rhythm of the drums demonstrates the character of the native inhabitants, who, depending on which tribes they belonged to, could be either friendly hosts or terrible head hunters and cannibals. The sound of cannons and gunshots fired by the white men is heard at the end of the movement, which represents the killing and oppression of the Indians.

5) The First Villages and the Independence: The sounds of church evoke the first villages settled by the Portuguese. A theme derived from the Brazilian independence hymn is used here as a bridge to the next movement.

6) The Brazilian People: Brazilians are represented here by a lively and rhythmic afoche (a dance from the state of Bahia) which begins in a tone that reflects the poverty of the people of the Brazilian Northeast as well as their happy cultural tradition. This episode is developed in an atmosphere of Brazilian popular street celebrations, as the soloist plays Brazilian folkloric instruments including the berimbau, tamborim, repinique and reco-reco.

7) Finale: Following variations of the Brazilian National Anthem, a bai?o [sic] full of life concludes the suite. In addition to the principal melody, small passages of the National Anthem and other classics of Brazilian music are used in this movement, including Carlos Gomes O Guarani and the prelude of Heitor Villa-Lobos Bachiana #4. In the final chords the musical theme derived from the word “Brasil” -- as presented in the beginning of this piece -- reappears, bringing the composition to a lively and joyful conclusion.