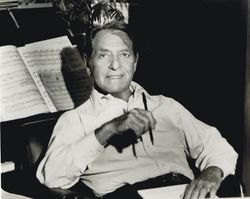 The Stripper is an instrumental composed by David Rose, recorded in 1958 and released four years later. It evinces a jazz influence with especially prominent trombone lines, and evokes the feel of music used to accompany striptease artists.

The song came to prominence by chance. David Rose had recorded Ebb Tide as an A-side of a record. His record company, MGM Records, wanted to get the record on the market quickly, but they discovered they had no B-side for it. Rose was away at the time the need for the B-side song surfaced. An MGM office boy was given the job of going through some of Rose's tapes of unreleased material to find something that would work; he liked the song and chose it as the flip side for the record. The song reached number one on Billboard's Top 100 chart in July, 1962. It became a gold record.

Purely as a joke, American composer David Rose used a few spare minutes of studio time to have the brass, the clarinets and the percussion section of his orchestra record a slightly extended version of what he still regarded as a silly throwaway version of his hit record Holiday For Strings. Rose had a handful of copies of the untitled number pressed on vinyl and handed out to orchestra members as novelty gifts, and that was the end of that.

Four years later a record label pulled the master recording out of the archives and had it put on the B-side of Rose’s version of another track. When a Los Angeles disc jockey flipped the disc and heard the piece now entitled The Stripper he thought it was so funny that he played it almost continuously during his program one day. Soon, The Stripper was a regional, then a national chart hit, and has become a permanent piece of American pop culture.