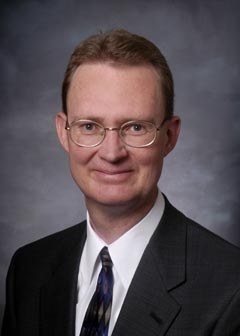 The title of this work is correctly written all in lower case: strike

strike was commissioned by the Barlow Endowment for Music Composition at Brigham Young University for the Meadows Wind Ensemble at Southern Methodist University. Jack Delaney, the stoup's conductor, asked me if I would write a shorn, energetic piece for the close of their concert at the 1997 conference of the College Band Director's National Association in Athens, George. Strike is a roughly six-minute work which begins and ends on the pitch F and has an overall fast-slow-fast scheme.

My dictionary lists 63 definitions for the word "strike". I like the definition "to produce by playing an instrument," as in the phrase, "strike up the band."

- Program Note from the composer

Constructed on a fast-slow-fast tempo scheme, Strike is an exploration of timbre and rhythm. The first section is slightly chaotic, as the low winds and percussion give some sense of pulse while the upper winds and brass seem to play disjointed melodic lines. The slow section is reminiscent of textural music, as the melodic lines are stretched until the static texture is broken by an accelerando transition to the final fast section. The concluding material has a more clearly defined melodic and rhythmic structure, as it grows to a dramatic close. Stephen Jones said that of all the sixty-three definitions of “strike” in the dictionary, he chose the definition, “to produce by playing instruments” as an inspiration for this piece (“as in strike up the band”). The result is a composition that explores the rhythmic, textural, and stylistic possibilities of the entire wind ensemble.

Strike was composed on a commission from the Meadows Wind Ensemble of Southern Methodist University and was premiered by the commissioning group at the 1997 conference of the College Band Directors National Association in Athens, Georgia.