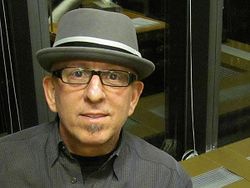 Steven Greenberg (b. 24 October 1950, St. Paul, Minn.) is an American musician, record producer and the owner of the independent label October Records.

In his twenties, Greenberg was a multi-instrumentalist who played in several bands. He had been trying for some time to secure a production deal, and he drew the interest of the Casablanca label with a disco track called Rock It, which became a hit locally. Released nationally by the band Lipps Inc. in late 1979, Rock It made it into the Top 20 on the Billboard Disco Charts.

The group's debut album, Mouth To Mouth, was released in November 1979. Funkytown was the first single, and it was an instant hit, climbing to No. 1 on May 31, 1980, and spending four weeks there.

Lipps Inc. released one more album before breaking up in 1985. Greenberg became a web designer in 1992 and stayed in that field through 2007.