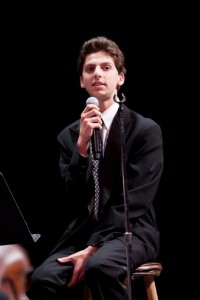 Stephen Spies (b. 1994) started playing violin at the age of 5, and grew up largely surrounded by a family of folk musicians. He was introduced to music composition when he entered the Crowden School of music for middle school. His first composition teacher, Molly Axtmann, introduced him to music composition by having him improvise and compose music for silent films. In high school, Stephen won the Adorno ScoreXchange Composers Competition and the NACUSAsf (National association of Composers USA San Francisco) 2009 Student Composer Competition. He won the Orlando Philharmonic Young Composers Challenge, giving him the rare opportunity to hear his symphonic work played by the Orlando Philharmonic as a junior in high school.

Recently, he has studied composition/music theory in the EAMA (European American Musical Alliance) program at the Schola Cantorum in Paris. He has also recently studied composition with composer David Conte and is studying with composer Mark Carlson while attending UCLA (University of California Los Angeles) as a composition major. He also has scored multiple student films collaborating with film students at UCLA.