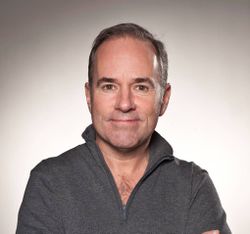 Stephen Flaherty (b. 18 September 1960, Pittsburgh, Penn.) is an American composer of musical theatre.

Flaherty began studying piano at the age of seven. When he was twelve he knew he wanted to write musicals and by age fourteen he had already composed his first musical score. He attended South Hills Catholic High School in Pittsburgh and later studied musical composition and piano at University of Cincinnati College-Conservatory of Music, graduating in 1982. He did additional graduate studies in Musical Theater at New York University.

As a college student, Flaherty played ragtime piano in a dance band. This early job would serve Flaherty well later in life when he had the opportunity to compose the score for the Broadway musical Ragtime. He moved to New York City in 1982 and joined the BMI Lehman Engel Musical Theater Workshop, founded by music director Lehman Engel, where he met Lynn Ahrens, who was to become his longtime collaborator. The first Ahrens and Flaherty collaboration that was produced was a children's show, The Emperor's New Clothes, for TheatreWorks USA in 1985. Their first Broadway musical was Once on This Island in 1990. Flaherty has since written many more full-length musicals, mostly in collaboration with Ms. Ahrens, all of which have been produced.

Flaherty also writes for film and the concert hall. He was nominated for two Academy Awards and two Golden Globe Awards for his first film, Twentieth Century Fox's animated Anastasia (1997). He also scored and wrote the songs for its animated sequel, Bartok the Magnificent. He wrote the original film score for the documentary After the Storm, which follows a group of teenagers as they perform Ahrens and Flaherty's Once On This Island in New Orleans post-Hurricane Katrina.

For the concert hall Flaherty wrote the music for the American River Suite, with lyrics by Bill Schermerhorn and commissioned by Macy's.

Ahrens and Flaherty teamed up again to write a musical version of the film Rocky, titled Rocky the Musical. The show premiered in Hamburg, Germany in October 2012.

He has received several commissions from Carnegie Hall, the Guggenheim Museum and the Boston Pops Orchestra, among others.