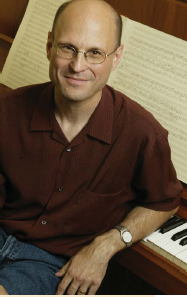 * For details about 'ringing metal,' see Discussion tab, above.

Spin Cycle was commissioned by H. Robert Reynolds and the University of Michigan Symphony Band. It was premiered by Michael Haithcock in March 2002, and is dedicated to T.J. Anderson. In the composer’s own words:

Spin Cycle was composed during a period I was writing music for choreography as well as incidental music for theater. The nature of those projects called for slow, contemplative music, so when the opportunity to compose a work for wind ensemble came along, I was eager to write music that was quick and agile. The title refers to the swirling, spinning melodic figured that are heard everywhere in the piece. These figures alternate with syncopated repeated notes that sound something like Morse code. In fact, these rhythms are based on names of people close to me which have been enciphered as a rhythmic pattern. This breathless, energetic music soon gives way to music with a more sustained and lyrical character. Now the spinning figures appear as ornaments to syncopated riffs accompanying long-breathed melodies. Dissonant trumpet fanfares based on the rhythmic cipher figures announce the recapitulation of the opening music, followed by an extended coda to bring the music to a conclusion.