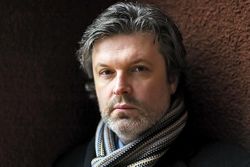 Sowetan Spring was written to commemorate the release from prison of Nelson Mandela in February 1990 and uses fragments of the South African people’s national anthem Nkosi Sikelel’ I Afrika.

I have for many years been fascinated by the music of the Dutch composer Louis Andriessen and especially by his handling of antiphonal hocketing effects. [A "hocket" is defined as "a spasmodic or interrupted effect in medieval and contemporary music, produced by dividing a melody between two parts, notes in one part coinciding with rests in the other."] So much so that I have been tempted into writing a hocket of my own on a number of occasions. A hocket opens this work, Sowetan Spring, but the antiphonal separation is not a spatial one but based on timbral differences. Another difference is that this hocket is not the basis of a static minimalist process but develops through interaction with other materials into a more dramatic scenario.

This is a special BASBWE (British Association of Symphonic Bands and Wind Ensembles) commission, to mark Glasgow’s designation as The Cultural Capital of Europe in 1990, with funds provided by BASBWE (Scotland).