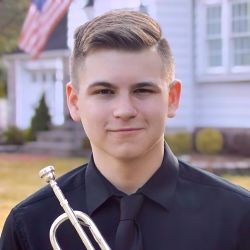 A Solemn Message was written to illustrate the devastating effects of cancer on the lives of millions — not only those physically suffering from it — but also those who have had their lives upturned with the diagnosis of a loved one.

The piece reads like an elegy, beginning with a pensive and anticipatory introduction. Solos transform and weave through the layers of the piece as an illustration of isolation and emptiness, which eventually escalate into a massive soundscape, heavy with the weight of grief and worry. With the bass drum and timpani echoing the beating of a heart, the piece becomes a reminder of the fragility of human life, in both the physical and the emotional sense. However, in the wake of the crushing climax, a thread of hope emerges as a clarinet solo, mirroring the piece’s introduction. This leads gently to the final chord in major where, in the aftermath of sorrow and devastation, there comes a fragment of warmth and reassurance with the knowledge that things will eventually heal.