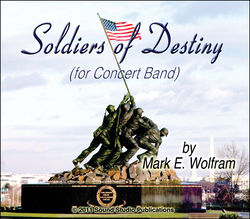 Inspired by the courage of our men and women in uniform, "Soldiers of Destiny" is an original setting of the traditional hymn, "Onward, Christian Soldiers" (lyrics by Sabine Baring-Gould and music by Sir Arthur Sullivan). It has an uptempo, multi-metered approach to the hymn, incorporating unexpected and refreshing harmonic and rhythmic twists into the work. It also quotes portions of 2 other war songs ("When Johnny Comes Marching Home" and "It's a Long Way to Tipperary") and uses original material to make a musical statement about war, Manifest Destiny and their effect on the individual.

The hymn is also the favored processional of the Salvation Army.

"Soldiers of Destiny" by Mark Wolfram is a GRADE V concert band composition for high school, college and community bands. Crucial solo and accompaniment parts are well cued. This piece is enlivening to the audience and most enjoyable for the performers.