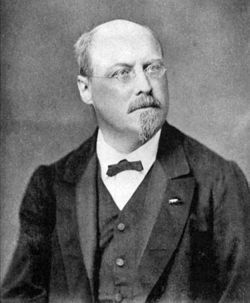 This work bears the designation Opus 188.

The lack of evidence to the contrary seems to indicate that Raff himself coined the word "sinfonietta" for his op. 188 in F. It has since been commonly used for works such as this -- "little" or "light" symphonies -- and Raff's piece pre-dates the next work (by Rimsky-Korsakov) by seven years. The sinfonietta was popular in its day and that no doubt helped the use of the term amongst composers.

He wrote the piece in Wiesbaden in spring 1873 during the period which was, as his daughter Helene wrote, "the cultural high point of his life". The Lenore Symphony had recently capped even the success of his "Forest" Symphony, and everywhere he was fêted and honoured. However, the next work he completed after the Sinfonietta -- his Sixth Symphony -- got a rather cooler reception and marked the start of what became a period of artistic crisis for the composer.

Isolated works are rare in Raff's canon. In contrast with his eleven symphonies, six operas, eight string quartets, four piano trios and five violin sonatas there is only one sinfonietta and only one other (earlier) piece for wind band. This is unlikely to signal any feeling by Raff that the work was a failure, however. It was virtually unique in its time and was popular from the first. Raff understood the financial imperative of getting his works performed. From a commercial point of view there may have been little point in writing another whilst the original one was doing so well in an uncontested field. From an artistic standpoint, it is difficult to see how he could have bettered his first attempt.

Written for pairs of flutes, oboes, clarinets, bassoons and French horns, it was clearly intended by Raff to be regarded as something greater than the wind serenades which had been popular since Mozart's time. Neither his motivation for writing the work nor the occasion of its premiere is recorded, but it was published in November 1874 by Siegel of Liepzig, and Raff himself also arranged all four movements for piano four hands.

The Sinfonietta's popularity endured and it was one of the works which continued to keep its composer's name before audiences, long after most of his music was forgotten. This is no doubt partly due to the comparative dearth of quality repertoire written for small wind bands, but it must also be because of the unfailing wit, vivacity and good humour of the music itself. It retains the traditional symphonic movement structure and is truly a "small symphony". Throughout, Raff employs his trademarks of counterpoint and classic musical forms but these never interfere with the work's pervading atmosphere of joi de vivre.

The first movement is in sonata form with contrasting sprightly and stately themes that are developed in counterpoint before being reprised. The second movement dances in F minor, and the third expresses lyrical Romanticism in C major. The final movement returns to F major in a dazzling, vivacious Vivace.