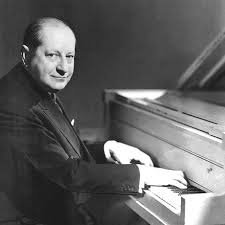 Romberg's early life was spent in Hungary, studying in various preparatory schools. He served in the Hungarian army in 1907 and 1908, stationed in Vienna. After his military service, he studied engineering at the Polytechnische Hochschule in Bucharest, but his love for music became stronger than his love for technical subjects. He moved to Vienna and studied music with Joseph Heuberger.

Romberg immigrated to the United States in 1909, settling in New York City. He first worked in a pencil factory, then as a cafe pianist, and eventually organized and conducted his own orchestra. By this time, he had attracted considerable attention as a composer. In 1913, he made the decision to devote his life to composition.

In 1918, he again entered military service, this time in the U.S. Army, touring army camps as an entertainer and composing or arranging music for army shows.

The New Moon was made into a movie shortly after its Broadway debut, and this prompted Romberg to move to Beverly Hills, California, where he created music for numerous movies and assisted with the movie versions of his own operettas. In 1942, he initiated concert tours with his own orchestra, continuing his "Evening with Sigmund Romberg" concerts until his death in 1951.