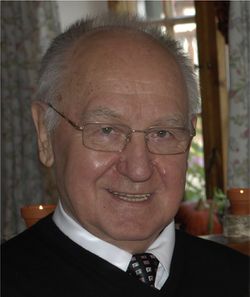 Rundel played the trombone in the community band and first tried compositions and arrangements as a teenager. His teachers were pioneers of the German wind band development, such as Hans Feliy Husadel, Gustav Lotterer und Hellmut Haase-Altendorf. Rundel had to learn the trade of a toolmaker, but he used every opportunity to extend his theoretical knowledge about music and his practical abilities as composer and conductor.

From 1961 he was conductor in Rot an der Rot, and some years later he also became conductor in Baltringen and Ummendorf. Later on, he took over the office as youth leader and chief conductor of the Biberach wind band association.

Rundel founded his own publishing company in 1964. At the beginning it was just a side job and mainly for distribution of existing music. With time he expanded the range of products, and in 1968 he decided to become a full-time publisher. One year later he published his first in-house productions, which caused enthusiasm with the bands. The most important things for Rundel were high quality and playability -- those principles are firmly established in the Rundel philosophy. He won over many composers, who shared his idea of playable compositions and arrangements for amateur bands.

Siegfried Rundel wrote more than 40 of his own compositions and 200 arrangements. His transcriptions were always qualified and in proper style. At the same time all his works bore his personal hallmarks, including polkas, marches or classical transcriptions.