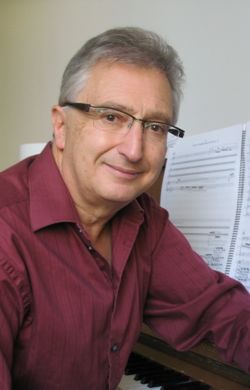 After earning a doctorate in communications, Dr. Robinovitch taught at the School of Social Sciences at York University (1970-1977).  He then left to pursue a career in music.  He had studied music at Indiana University in 1963, and at the Royal College of Music (1975-1978, 1996)

Sid Robinovitch is one of Canada's most versatile and widely performed composers, having written music for chorus, chamber groups, orchestra, along with music for films and radio. Frequently broadcast on CBC radio, his works have been featured by a large number of musical ensembles including the Winnipeg, Toronto and Montreal Symphony Orchestras, the Elmer Iseler Singers, and the Vancouver Chamber Choir. In addition to his concert music Robinovitch has written for film, radio and TV, where he is probably best known for his theme for the satirical comedy series, The Newsroom. Many of his works have religious themes.

While many of Robinovitch’s works are rooted in traditional or folk material, they often have a distinctly contemporary flavour as well. Dreaming Lolita, for example, is a dramatic retelling in poetic form of the famous Nabokov novel, while in Psalms of Experience the choral textures are infused with elements of Balinese music and rhythmic chanting.