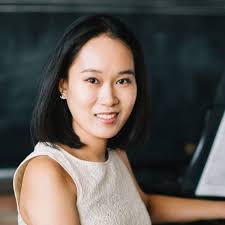 Shuying Li began her musical education in her native China. In her sophomore year at the Shanghai Conservatory of Music, she won a scholarship to continue undergraduate study at the Hartt School in Connecticut. She holds a doctoral and master’s degree from the University of Michigan.

Most recently, Shuying made her Carnegie Hall debut with the Orpheus Chamber Orchestra for the premiere of a commissioned work. In addition, Shuying has been named one of the three resident composers in the Composer Librettist Development Program with the American Lyric Theater (ALT) in their 2017-2018 season, to write a one-act opera to be produced by ALT in May 2018. In 2014, after performances by the Hartt Wind Ensemble and the University of Cincinnati CCM Wind Orchestra, Shuying’s work for band, Slippery Slope, won the ASCAP/CBDNA Frederick Fennell Prize.

Other awards include recognition as a finalist in the 2017, 2016 and 2015 ASCAP Morton Gould Young Composers Award, awards from The American Prize, the Michigan Music Teachers Association Commissioned Composer Competition, and the International J. Dorfman Composition Competition, among others. She was the composer in residence for the Romania ICon Arts Festival during summer 2014.

A believer that music has an innate power to promote cultural diversity, Shuying founded the Four Corners Ensemble in 2017, which consists of seven top-level emerging performers who are from six different countries.