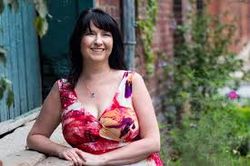 Shelley Elizabeth Marwood (b. 1980, Canada) is a Canadian composer and pianist.

After an early focus on orchestral music, Dr. Marwood has enjoyed the recent challenge of writing for the voice in various forms: two choral commissions, and participation in VISI's 2014 Art Song Lab with her comedic and theatrical art song Selfie. Most recently, the Regent Park School of Music in Toronto commissioned her for three works for soprano and piano,

In 2015 she won both the Karen Kieser Prize in Canadian Music (Imaginings) and the UofT Choral Composition Competition (These Fragile Snowflakes). She also received first prize in the 2008 Canadian Music Centre Prairie Region Emerging Composers’ Competition (Illumination), was a finalist in the 2006 Land's End Composers' Competition (Piano Trio No.1). Her work has received support from grants through the Ontario Arts Council, the Canada Council for the Arts, the University of Toronto, The Banff Centre, and the SOCAN Foundation.