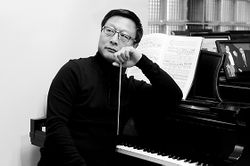 Shanghai Overture was originally written for orchestra, a commission by my alma mater, the Shanghai Conservatory of Music, in celebration of its eightieth anniversary. It was premiered on November 27, 2007, by the Youth Symphony Orchestra of the Shanghai Conservatory of Music, conducted by Muhai Tang. The version for symphonic band was commissioned by the University of Michigan Symphony Band for their 2011 tour to China.

In Western music, the term neo-Classicism primarily refers to a movement in music composition prevalent in the 1920s and 1930s. While the main aesthetics of the style emphasizes textural clarity, light orchestration and formal balance, some of the compositions were directly linked to specific composers from earlier periods. The most well-known composer of the movement was Igor Stravinsky who wrote a number of works including a neo-Bachian piano concerto, a neo-Pergolesian suite (Pulcinella), and a neo-Mozartian opera (The Rake’s Progress).

I always wondered what the result would be if I would adopt a similar concept and some of the techniques of the neo-Classical style and apply them to traditional Chinese classical or folk music. Although my approach is somewhat different from Stravinsky, I took the opportunity to explore the idea when I was asked to write a short composition for The Shanghai Conservatory of Music.

Shanghai Overture is inspired by two well-known traditional Chinese compositions, General’s Degree (将军令) and Purple Bamboo (紫竹调). Whereas both came from the same region near Shanghai, they differ vastly in character and color; one is grand and powerful while the other is light and elegant.

Shanghai Overture for symphonic band is dedicated to the Symphony Band at University of Michigan, where I have been teaching since 1995.