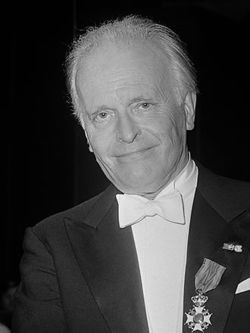 The Serenade is loosely based on the wind serenades of the 18th and 19th centuries and consists of four movements – Marsch, Nocturne, Scherzo and Hymne. As the titles suggest, this music is meant to be accessible to the listener and appropriate for concert as well as occasional performances. The music, written in 1944, is in a post-romantic style and runs the gamut from charming to brilliant to reflective.

Despite his extremely limited output as a composer, a few of his original works have entered the standard repertoire, especially those he composed for chamber ensembles. The most famous of these is his Sinfonietta for sixteen wind instruments, composed in 1943. The following year, he penned a substantial piece for brass instruments, harp, and percussion, first entitled Divertimento. Sometime after its completion, van Otterloo added a significant piano and celesta part and retitled the piece Serenade, resulting in the definitive version of the work.

The Serenade was the final piece that van Otterloo completed, although at the time he was only thirty-six years old. The years 1943 and 1944 were a tumultuous time for him personally: he was divorced from his second wife, Anette, in April of 1943, only to remarry her the following year. The Serenade comes from this period of instability, and although there are hints of conflict and strife woven into the work, the tone of the piece is one of strength and a unique brand of rough-hewn heroism and optimism.

Van Otterloo clearly had the model of the popular divertimenti and serenades of the eighteenth century in his mind when he constructed his work. It was built in four traditional movements, in the forms of a march, nocturne, scherzo, and hymn. However, the actual substance of the piece diverges dramatically from the typical sounds of a Classical serenade. Van Otterloo took full advantage of the strength and visceral power of the brass instruments, especially in the Marsch and Scherzo movements; the addition of the percussion instruments, harp, celesta, and piano to the brass texture is among the qualities that set this work apart from other similar brass ensemble pieces. These colors are especially compelling when combined with the muted effects and pungent harmonies of the ethereal Nocturne, which is the emotional center of the work. The concluding majestic Hymne serves as an apotheosis for the entire serenade; it may have been the very last original music van Otterloo composed, and it clearly remained important to him, as he rescored the movement to fulfill a commission he received from the Amsterdam municipality fourteen years later.