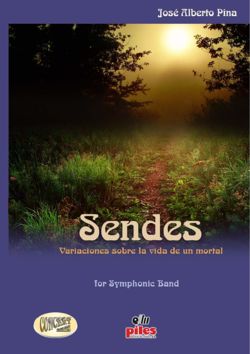 When I began to write this work, I had something very clear in mind. That was to try not to write a programmatic piece based on a story, but rather one based on an emotional image. My intention was to speak about the human being, to represent by means of music the emotions and the motivational processes which humans live with daily.

The work is a series of variations developed from a technical and musical point of view with which I am trying to stress, as I mentioned before, the life of a mortal, displaying some thematic variations at the same time as emotional ones.


From the very first bars, all the thematic material used later is clearly introduced, led by a leitmotif made up in this case by only three notes that represent the human being:
RE-MI-SOL. Immediately afterwards, we are listening to the main theme describing to us the personality of the main character.A bridge that will lead us into the inner life of our character, who will go along experiencing an emotional evolution to show us the different feelings and sensations that are progressively being discovered:

With these variations on the life of a mortal, I invite the listener to reflect on the manner in which we perceive these so fragile, complex and beautiful feelings we have as human beings.