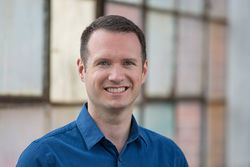 Scott Perkins (b. 1980, Connecticut) is an American composer, educator and scholar.

Scott enjoys a multifaceted career as an international prize-winning composer, an award-winning scholar, and a music professor at California State University, Sacramento. His work, praised by critics for publications including the Washington Post (“dramatic,” “colorful”) and the Washington Times (“perfectly orchestrated,” “haunting,” “a remarkable and welcome musical surprise”), includes art songs, opera, musical theatre, instrumental works, choral and chamber music, electroacoustic media, and music for film and church. He has been commissioned by organizations ranging from the Washington National Opera to the American Guild of Organists, and his work has been performed throughout North America and Europe. He has collaborated with musical and non-musical artists, including Tony Award-winning playwrights, Emmy-winning filmmakers, and celebrated poets.

Scott’s research interests are diverse. His work on the music of Benjamin Britten was awarded a prize by the New York State-St. Lawrence Chapter of the American Musicological Society. He gave the keynote address and a paper on the reception of Messiaen’s work in the United States in Zgorzelec, Poland, as part of the celebrations for the 75th anniversary of the premiere of the Quartet for the End of Time. He has also presented on the integration of non-Western music into musicianship curricula at a national conference of the Society of Arts Entrepreneurship Educators at The Ohio State University; teaching music-reading skills to amateur choirs at a Northeast Regional Convention of the American Guild of Organists at Yale University; 17th-century lute song performance practice at the University of Chicago; and aspects of setting Old English texts to music at Harvard University.

Scott has concertized as a tenor throughout the United States, England, Mexico, Scotland, and Norway. He has performed with professional ensembles as both a vocalist and a conductor, and he is a featured soloist on CDs produced by Bridge Records and Loft Recordings.

In 2017 Scott was appointed Assistant Professor of Music at California State University, Sacramento, where he is the coordinator of the music theory area. He teaches composition and courses in theory and musicianship, and he serves as co-director of Sacramento State’s Festival of New American Music (FeNAM). He has also taught at DePauw University, Central Connecticut State University, Nazareth College, and the Interlochen Summer Arts Academy.