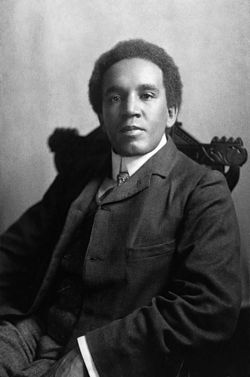 Taylor was brought up in Croydon, Surrey. There were numerous musicians on his mother's side and her father played the violin. He started teaching it to Coleridge when he was young. His ability was obvious when young, and his grandfather paid for the boy to have violin lessons. The extended family arranged for Taylor to study at the Royal College of Music, beginning at age 15. He changed from violin to composition, working under notable professor Charles Villiers Stanford. After completing his degree, Taylor became a professional musician, soon being appointed a professor at the Crystal Palace School of Music; and conducting the orchestra at the Croydon Conservatoire.

Coleridge-Taylor later caught the attention of renowned composer Sir Edward Elgar, eventually earning him a commission through Elgar's music publisher, August Johannes Jaeger. The resulting work, Ballade, was performed at the 1898 Three Choirs Festival and became his first major compositional success. His continued achievements led to three tours of the United States, and he even conducted the U.S. Marine Band at the White House while on tour in 1904. As a respected Black English composer, Coleridge-Taylor was warmly received by the Black American community, befriending W. E. B. Du Bois and collaborating with poet Laurence Dunbar. Coleridge-Taylor died at age thirty-seven of pneumonia in the midst of a thriving career.