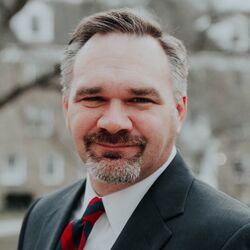 Russell Scarbrough (b. 12 August 1972, Baltimore, Md.) is an American composer, educator, and performer.

Dr. Scarbrough studied composition with Hank Levy at Towson State University, and Bill Dobbins at the Eastman School of Music. He received his Doctor of Musical Arts degree from Eastman in 2008.

His works drawing deeply from the jazz tradition and contemporary classical music. In 2004, he was awarded the Raymond and Maxine Schirmer Prize in Jazz Composition. He was a recipient of ASCAP Plus Awards from 2012 to 2021.

Dr. Scarbrough is assistant professor of jazz studies and jazz ensemble director at Houghton (N.Y.) University, and he also directs the Canisius College Jazz Ensemble. He also serves on the faculty the Csehy Summer School of Music. Previously, he directed the Roberts Wesleyan College Jazz Ensemble from 2005 to 2013.