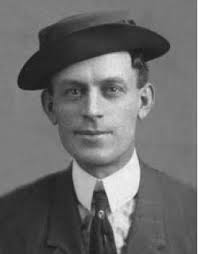 It is not known how he first became interested in music or whether his parents were musicians, but at 20 years of age he signed a contract with Barnum and Bailey's Circus to play euphonium for a five-year tour of Europe and Great Britain. He obviously had extensive musical training, because he was entrusted with the task of arranging music used by the band while on tour. During another period, he played with the Belford Carnival. While on tour with these organizations, he composed many of his famous marches.

During the time he was in Europe, his brother Newton was playing trumpet in theater orchestras in Philadelphia and Atlantic City. After accompanying many vaudeville shows, Newton conceived the idea of a music unit as a vaudeville act. He organized a group composed of himself, his brother Woodruff, James Brady, and Willie Patton. The act gained popularity under the name The Exposition Four. Russell Alexander replaced Willie Patton in the Exposition Four, which was basically a comedy team. One of them worked with blackface, and the audience loved the act so much that they were called for many repeat engagements throughout the United States.

Both Russell and Woodruff were frequently treated in tuberculosis sanitariums. Russell, despite his health problems, continued to compose. He finally succumbed to the disease, however, at a sanitarium in Liberty, New York, on October 1, 1915. He was only 38 years of age.

Alexander has come to be regarded as one of the greatest composers of circus music and was elected to the Windjammers Hall of Fame in 1978. It is a sad footnote to the history of band music that his widow, Eleanor, was penniless and sold all rights to his compositions to C.L. Barnhouse for a mere $125.