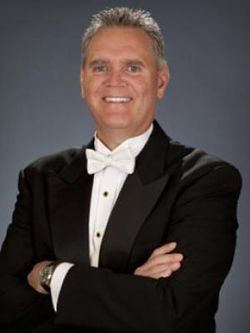 Russel C. Mikkelson (b. 1960, Wisconsin) is an American conductor and composer.

Dr. Mikkelson began his career as a high school band director, serving from 1984-1990 as director of bands at Stevens Point Area Senior High School. His bands developed a reputation for superior musicianship coupled with a deep understanding of the music being performed. Under his leadership, The Stevens Point Wind Ensemble performed at numerous state, regional and national conventions, numerous state, regional and national conventions.

Mikkelson was a conducting fellow at the University of Wisconsin-Madison and holds the distinction of being that institution's first recipient of the DMA degree in instrumental conducting. Prior to his appointment at OSU, Professor Mikkelson was director of bands and assistant professor of music at the State University of New York-College at Fredonia, where he conducted the wind symphony, concert band, orchestra, opera, and musical theatre productions.

Mikkelson serves as Director of University Bands and Associate Professor of Conducting at The Ohio State University, where he conducts the Wind Symphony and Chamber Winds, guides the graduate wind conducting program, and oversees all aspects of the university's band program. Under his direction, the OSU Wind Symphony has performed at the 2003 College Band Directors National Association Convention, the 2001 and 2004 Ohio Music Educators Association Conventions, and has recorded two CDs on the Mark Records label: Jubilare! and Sounds, Shapes and Symbols.

Dr. Mikkelson is past president of the Big Ten Band Directors Association, a member of the College Band Directors National Association, MENC, Phi Mu Alpha Sinfonia, Phi Beta Mu, and was recently elected to membership in the American Bandmasters Association. He is a recipient of the School of Music Distinguished Scholar Award. Dr. Mikkelson is active internationally as a guest conductor and clinician with recent engagements including the High School All-State Bands of New York, Ohio, and Wisconsin, the West Virginia University Wind Symphony, the Suffolk County, Long Island, NY Honors Orchestra, and the Memorial University of Newfoundland in St. John's, Newfoundland, Canada.