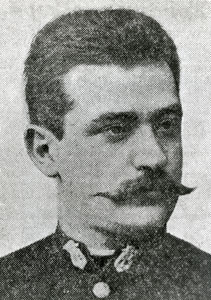 He studied at the Conservatory of Music in Vienna under Helmesberger and Volkmann until 1882. As a capable violinist, along with his father and brothers, he played in a well-known string quartet. As a military conductor, he spent two years in Plzen (1882-1884) and two in Prague (1884-1886). He had very good relationships with the prominent Czech composers Antonin Dvorak, Zdenek Fibich, and Karel Bendl.

Following his military career, he engaged in music teaching in Bucharest, Bulgaria and also directed music in Russia, Holland, Germany and Bulgaria. Undoubtedly, his popular march, Castaldo, Op. 40 (1884), a march Novacek wrote for the 28th Regiment as well as Na zdar nasi vystave brought him fame and invitations to conduct his music. Early publication of his music was by Hoffmann, Stareho, Boosey and Hawkes and others.

Nováček composed much pianoforte music including Mala suita, a collection for young Czech piano players, Valciky (Waltzes)for an album of Czech dances, a Sonata for Violin, Symphony for Wind Orchestra, Othello, and many other works.

Following his father's death in 1890, he took over his father's music institute in Temesvar which he managed for the next thirty years (until 1920). In 1921, he was promoted to be an army conductor, but did not accept this position and returned to Temesvar. From this time on, he concentrated solely on his music. In 1929, at the age of 69, he visited Prague to undergo medical treatment, but did not survive the operation.