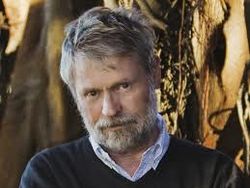 Drawn to music at an early age, Edwards' first attempts at composition date from his fourth year, but it was not until the age of 13, when taken to a concert by the Sydney Symphony Orchestra by his aunt that featured Beethoven's Fifth Symphony and Liszt's First Piano Concerto,that he became intensely aware of his vocation to become a composer.

Edwards attended Sydney Grammar School, which did not offer music at the time. At 15 years of age, Edwards was granted permission to enter the New South Wales Conservatorium of Music to study piano, oboe, harmony, counterpoint and theory during lunch hours and weekends. In 1963, after being awarded a Commonwealth Scholarship to the University of Sydney, he enrolled in a Bachelor of Arts degree, but became frustrated and dropped out after a year. Due to the benevolent intervention of composers Peter Sculthorpe and Sir Peter Maxwell Davies, he was able to earn a scholarship and complete a Bachelor of Music degree at the University of Adelaide's Elder Conservatorium in 1969, where his teachers included Peter Maxwell Davies (then composer-in-residence), Sándor Veress and Richard Meale. During vacations he worked as assistant to Peter Sculthorpe, gaining valuable insight into the working life of a composer. A further Commonwealth Scholarship enabled Edwards to complete his studies with Peter Maxwell Davies in London in 1970, earning a Master of Music degree, after which he spent 18 months composing at a remote Yorkshire farmhouse. Today, Edwards holds higher doctorates from the Universities of Sydney and Adelaide.

Returning to Sydney in 1970, Edwards taught in the Music Department of Sydney University. In 1974 he became a lecturer in the Sydney Conservatorium's School of Composition, remaining there until 1980, when he began working as a freelance composer and lecturer.

One of Australia’s best-known and most-performed composers, Edwards has created a distinctive sound world based on his interest in deep ecology and his awareness of the need to reconnect music with elemental forces and restore its traditional association with ritual. His music, universal in that it is concerned with age-old mysteries surrounding humanity, is at the same time connected to its roots in Australia, whose cultural diversity it celebrates, and from whose natural environment it draws inspiration, especially birdsong and the mysterious patterns and drones of insects.

Edwards has composed prolifically in most musical genres. Works for the concert hall sometimes require special lighting, movement, costume and visual accompaniment – notably his Fourth Symphony, Star Chant, his oboe concerto Bird Spirit Dreaming and his saxophone concerto Full Moon Dances. His Dawn Mantras greeted the new millennium in an international telecast from the sails of the Sydney Opera House. Recently completed works include Frog and Star Cycle, a double concerto for saxophonist Amy Dickson, percussionist Colin Currie, and the Sydney Symphony; Entwinings, for the Australian Chamber Orchestra; Bright Birds and Sorrows, a quintet for soprano saxophone and string quartet; and Dances of Life and Death for the Sydney Conservatorium Wind Symphony