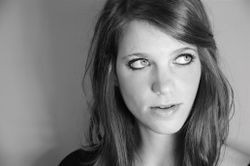 Rosalie Burrell is an American composer.

Ms. Burrell’s music has been performed at Carnegie Hall, Avery Fisher Hall and the Bruno Walter Auditorium at Lincoln Center, The Metropolitan Museum of Art, Symphony Space, Théâtre du Châtelet in Paris, the Lesher Center for the Arts, and the All Women’s National Brass Convention. Her long-standing musical relationship with the ensemble Patchtax resulted in a commission for the piece Zuelaika, a duo for viola and saxophone, which has since been workshopped and performed in a number of locations.

In 2013 she won both the Martinu Composition Award and the 2013 Mannes Orchestra Composition Competition. Other accolades include the 2012 Jean Schneider Goberman Award second prize for her Piano Quartet, Secret Gardens. She was a finalist for the ASCAP Morton Gould Young Composer Awards in 2014, 2015, 2017, and 2018.