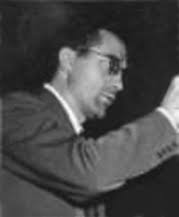 The Ronald Searle Suite was composed for a documentary cartoon designed by the famous British animator Ronald Searle. It was commissioned by Standard Oil of New Jersey in 1957. The cartoon, entitle Energetically Yours, chronicles the development of energy sources and was produced by Transfilm. The suite was orchestrated by Murray's friend and colleague, Frederick Steiner.

- Program Note from An Annotated Guide to Wind Chamber Music

Today's performance is the world premiere of the Muséik-driven version of the film, synchronized to the music without the use of click tracks.