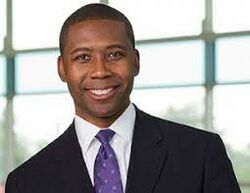 Dr. Dilworth, as a young boy, was impassioned by singing experiences in his school and church choirs. At the age of 11, he began experimenting with the music he was given by testing out alternate pitches and rhythms. At this time, he also began studying music theory and piano. During his high school years, he quickly discovered that he wanted to pursue music as a career. To fulfill his ambitions, Dilworth continued his education at Case Western Reserve in Cleveland, Ohio. There, he continued his study of voice and piano and received a Bachelor of Science degree in music education. He spent a year teaching elementary school music full time while also attending the University of Missouri-St. Louis to complete a master's degree in secondary education. Throughout the program, Dilworth's long-time musical idol, Robert Ray, taught him composition and arranging skills. After completing the master's degree in 1994, Dilworth spent another year teaching elementary music. He then continued on to receive a DMA in conducting, this time studying with Robert Harris.

Dr. Dilworth served as the director of the music education and choral programs at North Park University in Chicago, Illinois from 1996 to 2009. Since 1998, Dilworth has had over 150 works published. He has contributed to the Choir Builders series of choral textbooks and to the music magazine Music Express. In 2003, he was the recipient of North Park University's Zenos Hawkinson Award for Teaching Excellence and Campus Leadership. After 2009, Dilworth accepted a position as a professor of music at Temple University in Pennsylvania. He is the chair of the music education and music therapy department there. In 2017, he was honored with the Temple University Faculty Award for Research and Creative Achievement. Dilworth has, through his compositional and educational endeavors, become an active participant in the domestic and international worlds of music.

Both classical music and African-American folk music has influenced Dilworth's musical development and style. He recognizes Beethoven and Chopin as beloved classical icons in his life, but his compositional style is largely influenced by gospel and spiritual composers such as Robert Ray and Moses Hogan. Dilworth also draws inspiration from African-American literary tradition. He has a particular affinity for the poetry of Langston Hughes and Paul Lawrence Dunbar, a love which has moved him to compose settings of their texts.