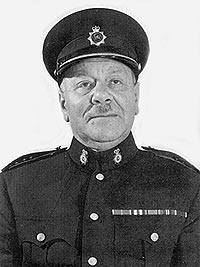 His father, Luigi Barsotti, who was a professional musician and at one time professor of music at the Milan (Italy) Conservatory of Music, gave his first music lessons. He made his first appearance in public at age 14 as a deputy flutist with the Hastings Municipal Orchestra.

He joined the “Buffs” regiment as a band boy in 1916 and made such rapid progress that he was promoted to band sergeant when he was only 22. He attended the Royal Military School of Music, Kneller Hall, and was appointed bandmaster of the Queen’s Royal Regiment in August, 1930, a position he held for 15 years.

Retiring in 1946 after 30 years of service in the British Army, Barsotti was appointed director of the Metropolitan Police Band in London. Under his direction, the band achieved very high standards. It broadcast regularly over the British Broadcasting Corporation and made several record albums. Barsotti retired from the Metropolitan Police Band in October, 1958. In 1961, he was awarded the M.B.E. at the Queen’s Birthday Ceremony for his outstanding service to military band music.

Barsotti composed many works for band, including fanfares and marches for state occasions, concert pieces, and brass band pieces. His Neapolitan Suite was chosen as the test piece for the fourth section in the 1965 brass band contest. He was regularly engaged as an adjudicator for national brass band contests and conducted massed bands at festival concerts in Royal Albert Hall.