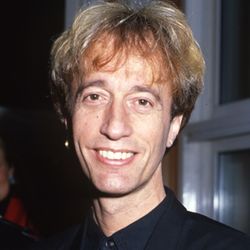 Gibb was born to English parents, Hugh and Barbara Gibb; the family later moved to Manchester (where Andy was born) before settling in Redcliffe, just north of Brisbane, Australia. Gibb began his career as part of the family trio (Barry-Maurice-Robin). When the group, renamed the Bee-Gees, found their first success, they returned to England where they achieved worldwide fame.

With record sales estimated in excess of 200 million, the Bee Gees became one of the most successful pop groups of all time. Music historian Paul Gambaccini described Gibb as "one of the major figures in the history of British music" and "one of the best white soul voices ever" owing to his distinctive vibrato-laden soulful voice.

Although Gibb sang without playing an instrument in Bee Gees performance, he played most of keyboards including Hammond organ, piano and Mellotron on the album Odessa (1969) rather than Maurice. He also played acoustic guitar, Hammond organ and drum machine on his debut solo album Robin's Reign (1970).

In 2002, the Bee Gees were appointed as CBEs for their "contribution to music".

From 2008 to 2011, Gibb was president of the Heritage Foundation, honouring figures in British culture. After a career spanning six decades, Gibb last performed on stage in February 2012, supporting injured British servicemen at a charity concert at the London Palladium.