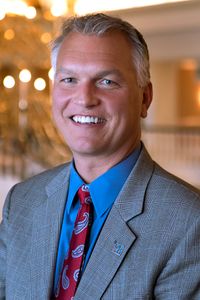 Rick DeJonge is an American composer and conductor.

Mr. DeJonge's mother was a band director, and musician and he was inspired by all the different sounds of the instruments from an early age. He started teaching himself the piano at age nine, and by the time he was 11 he would play different parts of my friends’ music on the piano. That is really when he started to understand not only the different transpositions of the instruments, but also how the different instruments were joined together to create specific colors. By the eighth grade, he was writing small pieces for his middle school band.

Mr. DeJonge is a graduate of the Scoring for Motion Pictures and Television program at the University of Southern California, and also earned a Master’s Art and Bachelor’s of Music degrees at Western Michigan University. As a composer, DeJonge has written music for orchestra and wind ensemble. He also has worked on the scores for television programs such as Lost, The West Wing and CSI Miami. He also has a long-standing relationship with the Boston Brass.

As a conductor, DeJonge has conducted his compositions for Paramount, Fox, and Firehouse Studios in Pasadena, California. He also wrote the music and did the sound design for the popular Nintendo game Konductra, and several wii games.