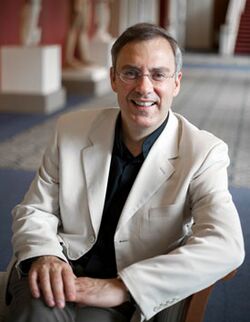 Richard Prior (b. c. 1966, England) is a British educator, composer and conductor.

Prior's musical training began in his native England, where he received degrees from Leeds and Nottingham Universities, and was later a visiting fellow-in-music and guest composer at Oxford University. Richard is an associate fellow of the National College of Music in the UK. His composition teachers and mentors include Alan Ridout, Philip Wilby, James Fulkerson, Nigel Osborne and Trevor Wishart. He has been a selected participant in workshops and master classes with a diverse array of composers including Pierre Boulez, Henryk Gorecki, John McCabe and Milton Babbitt.

For twenty-five years, he taught composition and built notable symphony programs at several universities and colleges in the United States, before moving exclusively to professional conducting engagements and composing.

A winner of numerous awards for his conducting and compositions, Richard received the 2008 Harvey Philips Award for Excellence in Composition at the Cincinnati Conservatory of Music, the 2009 Winship Award and 2011 Crystal Apple Award for Excellence in Education at Emory University. His choral-orchestral work hymn for nations united received Awards of Merit in two categories (Symphonic Music and Composition) in the 2013 Global Music Awards. Recent composition projects include Symphony No. 4, commissioned by Robert Spano and the Atlanta Symphony Orchestra, and a piano concerto for renowned British pianist Ian Hobson.

As a guest conductor, he has led performances with members of a number of symphonies, and has worked with a range of distinguished soloists, both vocal and instrumental. With a deep background in choral music, Richard is a versatile conductor who can draw together the forces for opera as well as major choral-orchestral repertoire.

From works written as a child and presented in the presence of Queen Elizabeth II to his professional debut in 1988 at London’s Westminster Abbey, Prior’s music has been performed, recorded, and broadcast widely in Europe and North America. Matt Haimovitz premiered Richard’s cello concerto in October, 2014 in a performance conducted by the composer, and the Atlanta Symphony Orchestra and Music Director Robert Spano commissioned …of shadow and light… (incantations for orchestra) which premiered in October, 2013.