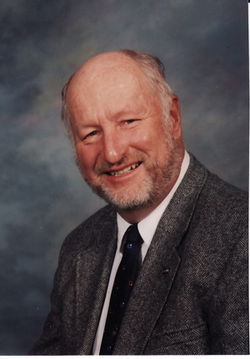 Richard Baller is an American composer, teacher, and conductor. His educational credentials include a B.M. from Carthage College; a M.M. from Northwestern University; and additional graduate work at the University of Nebraska, Bemidji State University in Minnesota, Drake University in Iowa, and Morehead State University in Kentucky. He attended elementary and high school in Nebraska and was active in all athletics and stage as well as music.

During his two years in the military he served as assistant conductor of the 5th RCT Army Band in Korea, and in the same capacity with the 25th Infantry Division Band in the Hawaiian Islands. He also conducted the Janesville Municipal Band from 1977 to 1994.

Mr. Baller retired in Beloit, Wisconsin, in 1995 from a lifetime career as a public school band director in Nebraska, Iowa and Wisconsin. He served as department chair from 1987 to his retirement.

Mr. Baller remains quite active as a solo and large group festival adjudicator, with numerous judging assignments in Iowa and Illinois, as well as Wisconsin. His professional memberships include NBA, in which he is a current board member for Wisconsin; WBA (board member); Phi Beta Mu (current president); MENC (Certified Music Educator); ITG; PAS; and WREA/BEA. He has served as the coordinator of the NBA-WC College All-Star Band since its inception in 2002.

His clinic work has included a workshop for Prince William County schools in Virginia in 1995, guest lecturing at U.W. in Madison and Cardinal Stritch University in Milwaukee, and guest conductor for the 1996 Honenegah area summer band camp. Mr. Baller’s Aldrich J.H.S. band performed at the 1994 NBA-WC Convention in Stevens Point, and in the same year for the P.A.S. convention in Waukesha. With the Janesville Municipal Band he has hosted the W.B.A. Convention in Janesville in 1979.

His performing interests have included 25 years as a trombonist in the Beloit/Janesville Symphony Orchestra, and as a low brass player in several area bands and churches. His current playing since 1990 is with the First Brigade Civil War Band of Watertown, WI, as an over-the-shoulder tenor horn player. He also has been extensively involved in producing computerized music for that group from the original manuscripts.

His BandBusiness1 arrangements, used for his own bands and others, include Fifteen Christmas Carols for Percussion, Christmas Fanfares for Band, Santa’s Second String (band novelty), My Christmas Solo (band novelty), Six English Morris Dances for WW Quintet/Saxophone Quartet, The Entertainer, for clarinet quartet Fanfares for The Star Spangled Banner and On Wisconsin Peaches (xylophone solo w/band acc.) We Wish You A Merry Christmas.