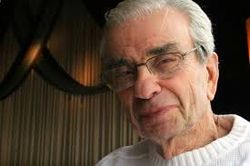 Adler had a musical upbringing, his father being a renowned Jewish concert pianist as well as teacher of such composers as Aaron Copland. He graduated from the University of North Carolina at Chapel Hill in 1943 and served in the U.S. Naval Reserve during World War II. After his Navy service he began his career as a lyricist, teaming up with Jerry Ross in 1950. As a duo they worked in tandem, both taking credit for lyrics and music.

After establishing their partnership, Adler and Ross quickly became protégés of composer, lyricist and publisher Frank Loesser. Their first notable composition was the song Rags to Riches, which was recorded by Tony Bennett and reached number 1 on the charts in late 1953.

Adler and Ross's second Broadway effort, The Pajama Game, opened in May 1954 and was a popular as well as a critical success, winning Tony Awards as well as the Donaldson Award and the Variety Drama Critics Award.

Opening almost exactly a year later, their next vehicle, Damn Yankees. replicated the awards and success of the earlier show. Cross-over hits from the show were Heart, recorded by Eddie Fisher and Whatever Lola Wants, by Sarah Vaughan.

The duo authored the music and lyrics for three great Broadway successes in three years, and had seen over a half-dozen of their songs reach the U.S. top ten, two of them peaking at #1. However, their partnership was cut short when Ross died of a lung ailment in November 1955, aged 29.

Adler continued to write both alone and with other partners, and composed a major 1958 hit in collaboration with Robert Allen: Everybody Loves a Lover, as recorded by Doris Day. However, after 1955 Adler had no further successes on Broadway either as a composer or a producer, although revivals of The Pajama Game and Damn Yankees have proved popular.

Adler staged and produced several shows for U.S. presidents; the most notable of these was a 1962 Madison Square Garden birthday celebration for John F. Kennedy that included Marilyn Monroe singing a version of Happy Birthday to the president in her trademark breathy voice.