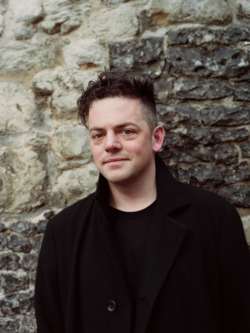 I was initially terrified of writing for bassoon and wind ensemble, mainly because of the dearth of previous examples from which I could steal, as I would do with a concerto for violin or piano. I found myself sniffing around the history of the bassoon, and how it often functioned, in sacred music, as a combination of a bass instrument and a tenor instrument -- a more acrobatic use of the organ’s pedals. I thought about the period during the Reformation when the organ was banned from church, and thought about the effect of that great silencing. This brought me to thinking -- as so many of my processes do -- about Orlando Gibbons (1583–1625) whose music would have been sung during this time.

I’ve written a great deal of music which could be described as a conversation with (or indeed a love letter to) Gibbons, including setting the text of his autopsy, and I’ve always found a kind of artistic solace and surprise in his music, so the title refers to that music as a source for endless discovery. I took a beautiful piece of his keyboard music (a pavane in A-minor) and generated from it a cycle of fifteen chords, imagining each one as being a resonance from the original keyboard piece, as if played with the sustain pedal locked down and from a great distance, the original chord structure lost in a haze of its own transitions and interstices. From there, I wrote a set of variations, where the solo bassoon walks through these chords with a series of gaits: linear and calm, a sort of bouncing upwards figure, a berceuse (cradle song), and more virtuosic fast passages.

The piece grows more and more intense and violent, and after a severe cadenza consisting only of 8th notes featuring the registral extremes of the bassoon, the orchestra explodes with violent chords. Out of this texture then emerges a direct quotation of the Gibbons, played here on the solo bassoon and its two colleagues in the ensemble, as well as the bass clarinet assuming the lowest notes: the bassoons have been promoted from the plodding bass register to the lyrical and more explicitly melodic upper register. The orchestra churns through the chord cycle one more time, and the piece ends brightly.

It lasts eighteen minutes long, and is dedicated to Michael Harley and Scott Weiss.