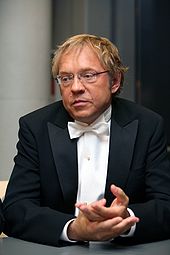 Rein Rannap (b. 6 October 1953, Estonia) is an Estonian pianist, composer, and improvisator

Rannap was born into a musical family. His father was a musician, teacher, and professor of musical education, and his mother was a violinist, teacher, and music critic. He studied piano at Tallin Music Secondary School and the Tallin Conservatory. He took post-graduate studies at the Moscow conservatory. From 1991-1995, he studied composition with Stephen Hartke at the University of Southern California.

He has been a recitalist throughout the Soviet Union, in many European cities, and in the larger cities in the United States, Canada, and Australia since 1968. In 1973, he was a winner of the Competition Estonian Pianists, and in 1976, he was a finalist and prize-winner at the International Bach piano competition in Leipzig.

As a composer, Rannap has written music for piano, orchestra, symphonic wind band, and chamber ensembles. Rannap has been a leader of three rock bands.