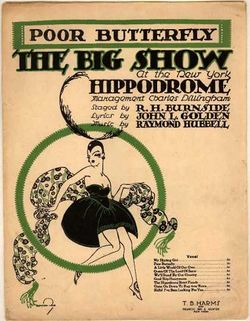 Hubbell was born in Urbana, Ohio. He attended schools in Urbana and studied music in Chicago, where he formed a dance band. He worked for Charles K. Harris Publishers as a staff arranger and pianist. His first compositions for stage musicals were the songs for Chow Chow (lyrics and book by Addison Burkhardt), which ran for 127 performances in Chicago in 1902. Renamed and revised as The Runaways in 1903, the show ran for 167 days in New York and then toured for several years. Hubbell began composing music for the Ziegfeld Follies in 1911 and eventually scored seven editions.

In 1915 he was hired as musical director for the Hippodrome after the previous music director, Manuel Klein, left abruptly after a disagreement with Lee Shubert and Jacob J. Shubert. He continued composing for the theater until 1923. The song he is most remembered for, Poor Butterfly, was written for one of the first shows he wrote for the Hippodrome, The Big Show. According to his obituary, he thought his best song was The Ladder of Rose, written for the 1915 Hippodrome hit, Hip-Hip-Hooray. His last Broadway work was the score for the 1928 musical Three Cheers, starring Will Rogers. In reviewing the show, Brooks Atkinson wrote "Most of the music is unpretentiously melodious." Soon after he retired to Miami, Florida.

He was one of the founding members of ASCAP in 1914. For 23 years he was head of the membership committee, and for seven years was its treasurer.