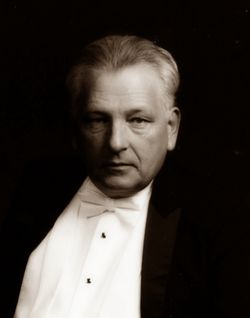 Raymond Helble (b. 3 February 1949, N.Y.) is an American composer and conductor.

Helble began composing at the age of 10 and conducting at 12. As a child, he was self-taught in composition, and had only class lessons in violin, as his family could not afford private music lessons.

When a senior in High School, he entered Julliard, the Manhattan School of Music, and the Eastman School due to his highly developed compositional technique, including eighteenth-century contrapuntal writing; technical skills learned by working through music theory textbooks (Fux, Goetchius, and Piston,) and studying scores from the local public library.

Although Helble was involved in the business world outside of music for most of his working career, he continued to write on commission for thirty-five years, and has been a guest at many colleges and universities to conduct performances of his works or participate in composition seminars.

Mr. Helble's music is recognized for its technical excellence, distinctive motivic material, contrapuntal dexterity, and high polish, whether he writes in a tonal, modal, atonal, or serial manner. Of his 50-plus published works, many have been in print for 30 years, and continue to find a market. He writes in every classical genre except opera.

Due to his long association with marimba virtuoso and instrument designer Leigh Howard Stevens, Helble has produced a large set of works both for the marimba, the percussion ensemble, and marimba in chamber music settings that are standard repertoire. Percussionists, chamber groups, choral groups, and orchestras perform Mr. Helble's music all over the world, and he has received ASCAP awards every year since 1990.