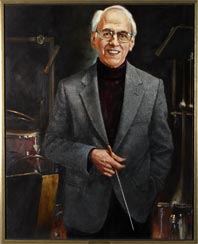 In 1959, he opened an Arrangers’ Workshop at the Eastman School of Music. He was head of Eastman’s Jazz Studies and Contemporary Media Programs for many years. He also was chief arranger and co-director of music at Radio City Music Hall in New York City. He also composed music for the prize winning television documentary Saga of Western Man.